Even though the Miller Tree Inn is closed to non-essential travelers until at least May 4, we are thinking of our guests and are getting prepared for them when the time comes.  Innkeeper Bill has been busy painting and Innkeeper Susan has been doing lots of laundry, in addition to trying out new recipes.  Today we joined the “Still Inn Business” campaign.  This campaign is soliciting Apple Pie recipes for May 13th and Apple Pie Day.  We were unaware that there was such a day until recently, but Washington state is well known for being a major apple producer and we have made lots of apple recipes including apple pancakes and apple french toast.  For this apple pie recipe, we worked closely with Ruth, our Welsh friend.  The filling is based on the traditional Welsh Eve’s Pudding.  It smelled heavenly baking, and Bill and Susan both give it a “thumbs up”.  Hope you enjoy it!

Pie Crust:  Use your favorite recipe for making a two crust pie or try our “No Fail” recipe:

Sift flour and salt into a large bowl.  Measure out 1/3 cup of the flour mixture into a small bowl.  Mix the flour in the small bowl with the water to make a paste.  Add the shortening to the flour in the large bowl and mix with fingers or a pastry blender until it crumbles into the size of peas.  Add the paste mixture to this and mix in with a fork until it forms a ball.  Now it is ready to divide and roll out.

1 1/3 pound cooking apples-peeled and roughly chopped. Use any firm, slightly tart cooking Apple, such as Braeburn. 6 Tablespoons light brown sugar, 1 small lemon, use juice and zest.1/2 teaspoon ground cinnamon and sugar. Stir these then add cut apples to stir in and coat.  Pour into pie plate with the bottom crust.  Top with the remaining crust.  Melt a little butter and brush over the top.  Mix a Tablespoon of white sugar with a dash of cinnamon and a dash of nutmeg and sprinkle over the top of the crust.  Don’t forget to add some vent holes in the crust. 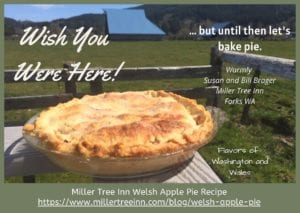